Performative installation in public space in collaboration with Olaf Hirschberg 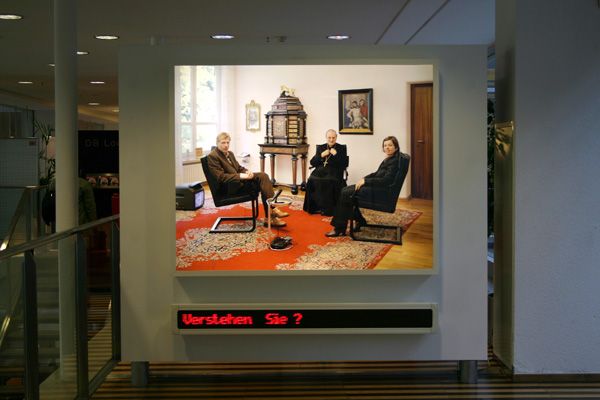 The participatory, performative installation is a project is a confronting examination of the societal and self-imposed borders of our individual realities. An evocative and complex installation, first presented in a waiting room of the Cologne central station is the result of a unique discussion between the artists and Archbishop of Cologne, Cardinal Meisner. After a sustained dialogue with the Catholic Church, Hoppe/Hirschberg organized a meeting with the Cardinal to engage him in an exchange on the subject of borders, using two of their own artworks as catalysts for a debate.

The conversation and photographic portrait taken during the encounter come together in this piece, a reflection on the position of the artist, the power of the symbolic and the potential of the viewer as a dynamic giver of meaning. The work’s inexorable gaze forces us to deal with the entanglement and intersection of borders in the textual and visual components of the piece itself, but also to question our own interpretations of image as truth and consensus as identity.