Performance-manifest and audio installation in public space to the parliamentary elections on the 24th of September 2017, Germany. 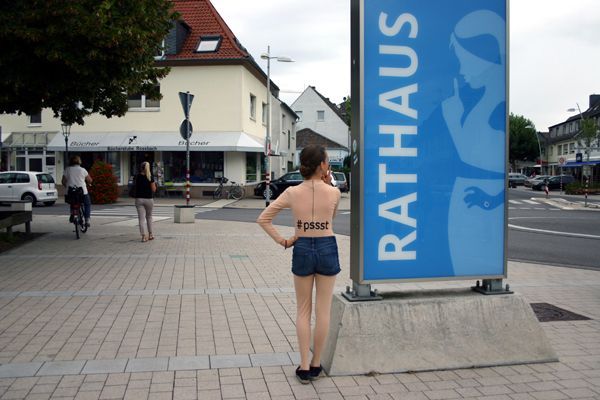 The performative city occupation in the small town Monheim am Rhein is dedicated to the best-known Monheim's landmark, the mother goose (Gänseliesel), who wants to silence her geese with the gesture of her left index finger in front of her lips.

With the gesture of the historical figure of Gänseliesel, the performative manifest #pssst calls for silence in the bustle of everyday life, particularly on the Election Day, 24th of September 2017, and cause us to pause for a moment - think about what we say (and do).

The main actresses are groups of young people, who are distributed in the most diverse places throughout the city, with the gesture of the pointing finger before the mouth. As a closed group, they slowly move through the streets of the inner city, distribute stickers with words of positive action instructions as for a peaceful, democratic cohabitation.

The final takes place before the Schelmenturm, another Monheim landmark. The 26-meter-high tower was built around 1425 to protect the freedom of Monheim as part of a fortification. There, the performance group met as voice choir, whose exclamations of linguistic contrast pairs assembled with goose chatter and the interjection "pssst" resulted in a audio composition.